Do you recall the “final goodbye” videos that were flying out of Aleppo and invading mainstream media at an alarming rate? The ones created by “activists” just as Aleppo was being liberated by the Syrian Arab Army and allies? If not let me refresh your memory…

Shortly after the Liberation of Aleppo in December 2016, media chaos erupted in what seemed like another coordinated and deliberate Assad demonising worldwide mainstream media propaganda campaign. This in no way reflected the reality on the ground in Aleppo. What wasn’t shown on mainstream media was that people in Aleppo were actually engaged in joyous celebrations after being liberated from head chopping, organ eating, kidnapping and murdering terrorists. 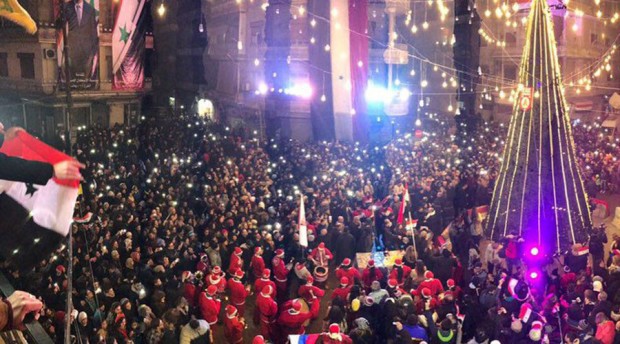 Christmas tree’s and decorations filled the streets and homes of people who for 5 years were forced to live under the Wahhabi supporting terrorists. People were finally allowed to celebrate and were taking to the streets in mass numbers to express their gratitude to the Syrian government and Army for finally freeing them from the hell they had endured for the past 5 years. The only way you would have seen these heartwarming images and videos is if you knew people that were showing these images and videos on social media. What was shown on mainstream media was the terrorist supporters sending out “final goodbye” messages where they claimed they were about to be killed and feared for their lives.

People came out in droves to celebrate the liberation of Aleppo.

What was shown on mainstream media was the terrorist supporting “activists” sending out “final goodbye” messages where they claimed they were about to be killed and feared for their lives.

These activists in an effort to cause public outrage manufactured fictitious stories that would make the Western public specifically start changing the Facebook profile pictures to show support and start beating the war drums yet again and demand that President Assad be forced to resign. Did they provide any factual evidence to support their ridiculous claims? Evidence that would beyond a reasonable doubt support their outrageous allegations. Factual evidence that clearly shows the alleged mass executions, burning at the stake, children being murdered, Syrian Arab Army dancing in the bloody streets, or that Russians too were executing hundreds of people, like they claimed. No, they didn’t. Have we not seen enough evidence during the past almost 6 years of war to discredit these liars? Is their agenda not transparent enough at this point?

No one can deny that people died during 6 years of war, almost every family has lost at least one, person including my own. It’s a war, there’s no clean war, innocent people always get caught in the cross hairs. The point is they are not being executed by the Syrian and Russian military as portrayed in mainstream media. Also, the imposed war and invasion in Syria was not a revolution or civil war as they claimed. For more information on The Dirty War on Syria read Professor Tim Anderson’s book and articles.

To better understand the fake news phenomenon that was taking place you need to ask yourself these questions. Who beheaded Abdullah Issa a 12/13 year old Palestinian child living in Aleppo? You may have seen the extremely disturbing video and pictures of Abdullah on the back of a pickup truck with the Nour Al Din el Zinki  terrorists. This is an Aleppo “moderate rebel” group that was supported by Obama. On video the terrorists mockingly asked Abdullah how he would like to be killed, he quietly pleaded to be shot, then they told him that they were going to decapitate him, I am not going to include the video here because it is very graphic but this shows you the inhumane nature of these head-chopping beasts.

And the Oscar for Best Documentary goes to…

The “unbiased, unarmed humanitarians also known as The White Helmets“.  This group of “heroes” as the media presented them to the world were also ones that recently won an Oscar for their documentary. These actors were also nominated for the Nobel peace prize. Who are the White Helmets you might ask? Well, when they are not faking rescues on camera for donations they can be seen with their weapons waving the Al Qaeda flag. These men are Al Qaeda’s civil defence and are not the real Syrian Civil Defense. They act in order to get donations and have received over $100 million dollars from many nations and private donors.

Every single armed group that is against the legitimate Syrian government and against the Syrian Arab Army is affiliated with Al Qaeda or another terrorist organisation. That’s a fact.

These “final goodbye” videos are simply amped up propaganda by these terrorist supporting “opposition activists” that have realised they lost their fake “revolution”. Mainstream media news was excitedly showing these goodbye stories repeatedly to add to the hysteria and confuse people even further. Long gone are the days of objective reporting by these “news” channels.

When the main faces of the fake revolution felt that they were losing their battle they decided to go above and beyond the usual lies and started making up ridiculous stories. The last hospital, last doctor, last veterinarian, last clown, last farmer, and last flower shop were hit.. again.  The list of lasts goes on and on.  Everything was falsely blamed on the Syrian Arab Army and the Russian hysteria started to grow as well.

https://goo.gl/images/UgFdgB The last clown of Aleppo.

Let me introduce you to some of the most vocal and well connected fake “activists” and spokespersons for the Revolution in Syria. They brought us heart breaking, gut wrenching tweets, posts, videos and personal testimonies seemingly from Aleppo.

Our first actor is Bilal Abdul Kareem a journalist born in NY, who studied performing arts, and acted on many professional stages. He converted to Islam in 1997, and decided to travel to Sudan to learn more about his faith and the Arabic language. After a week he left and went to Egypt. There he worked for Huda TV a channel owned by Saudi Arabia.  He then decided to go to Syria in 2012 where he would document resistance fighters activities.  He is sympathetic and apologetic towards these terrorists and has tried to paint them in a very human and moderate light rather than expose their extremist Wahhabi views. He has clearly shown his sectarian bias and has been exposed for his close friendships with these AlQaeda and Daesh terrorists. His sectarian-driven propaganda against the Syrian government and one sided journalism has done much more harm than good for the Syrian war. Most recently Bilal decided along with AlJazeera journalist Ahmad Zaidan to sue President Donald Trump for being placed on a Obama’s “kill list“.

Next is a 7-year-old twitter prodigy named Bana AlAbed  whose account has been traced back to the U.K. She rose to popularity on twitter in a short period of time and was referred to as the Anne Frank of our time. She is the ultimate propaganda stunt during this war. Child exploitation is a very low level to stoop to and that’s exactly what the Opposition including the Free Syrian Army (FSA) who are aligned with the AlQaeda have done. Her final message was“I am talking to the world now live from East #Aleppo. This is my last moment to either live or die.” I wrote about Bana in two other articles that can be seen HERE and HERE. Also worth the read is THIS detailed report on Bana.

Lastly, Lina Al Shamy an “activist” tweeting from Aleppo made this desperate plea: “Humans all over the world, don’t sleep! You can do something, protest now! Stop the genocide”. Round of applause for her superb acting. 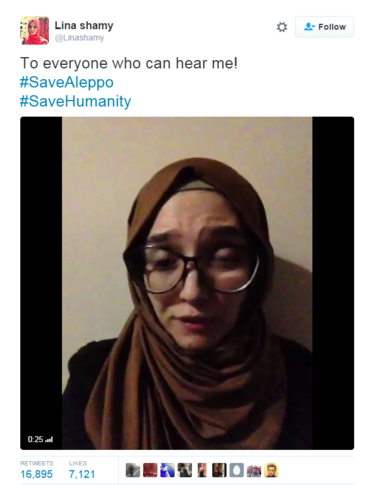 This brings me to this one bold example of the multilayered game of lies the media is playing by showing fake pictures to prey on viewers emotions and garner support for their fake revolution. Lebanese news anchor Dima Sadek is using pictures from Pakistan and saying this is Aleppo. The caption reads “to those who are celebrating liberation, take a look at this”. Aleppo. Lies upon lies.

Game over guys. You’ve been exposed. A more in-depth look at these fake activists can be seen in this article. Everyone needs to help in countering this misinformation/fake news rabid media campaign. Syrians are depending on us to help raise awareness to end this war.

My Original article: Blood of the Innocent on the Hands of Mainstream Media written on December 20, 2016