“Next the statesmen will invent cheap lies, putting the blame upon the nation that is attacked, and every man will be glad of those conscience-soothing falsities, and will diligently study them, and refuse to examine any refutations of them; and thus he will by and by convincing himself that the war is just, and will thank God for the better sleep he enjoys after this process of grotesque self-deception.” Mark Twain, The Mysterious Stranger, 1916, Ch.9

War propaganda is a tried and true mechanism with which wars have been fueled throughout history. Government’s, the media, opposition parties, war mongers, etc. have all been known to use exaggeration and psychological warfare to sway popular opinion. They might change their tactics and methods slightly but their purpose remains singular. Garnering emotional support for one side while demonizing the other side by using emotional extortion from gullible members of society. One of the cutest propaganda tools will be the focus of this article.

Soon after her debut on Twitter in September of 2016, a little brown-eyed girl from war-torn Eastern Aleppo, Syria shot to fame for her tweets documenting the war. She quickly became the face of the fake “Syrian Revolution” and a fervent anti-government voice calling for a “no fly zone” and the toppling of democratically elected President Dr. Bashar Al Assad. Little 7-year-old Bana Alabed’s Twitter account reached paramount levels of exposure in a very short period of time. Bana became a household name shortly after her first tweet, mainly thanks to her many celebrity friends and fans who flocked to her account for what they believed were “factual political commentary and groundbreaking informative tweets” from the youngest geopolitical analyst on the planet. Who according to Wikipedia is a Syrian Journalist as well.

RT wrote an article stating there was skepticism regarding the legitimacy of her account, “Within two days of setting up the account, she had used #HolocaustAleppo, #MassacreInAleppo, #StopAleppoMassacre and tweeted at Russian President Vladimir Putin, US President Barack Obama, and Syrian President Bashar Assad.”

Her accelerated rise to fame came via one of social media’s most popular platforms among politicians and public figures. In 140 characters or less a tweet can make waves around the world. Her tweets did just that. It is mind boggling how quickly she gained hundreds of thousands of followers. Unless of course many of those followers were bought which is a feature that is available on Twitter to help accounts go from total obscurity to profound popularity in a very short span of time. Also, worth noting Celebrities, Western journalists and popular opposition bloggers contribute to the viral dissemination of Bana’s posts. It took just three hours to collect more than 3,700 likes and more than 5,000 retweets after the publication of one of the first tweets of Bana.

According to Social Rank website, the request “Who was your first follower?” shows the first subscriber of Bana was an Al-Jazeera journalist Abdul Aziz Ahmed.

Less than a year later, little Bana has accomplished what many people would only dream of. Most recently she has written a book thanks to J.K. Rowling which is available now on pre-order on amazon.com. It will officially hit the shelves on October 3rd, 2017.  If all of this seems a bit unrealistic and staged, that is because it simply is just that. Is it simply a coincidence that well known left-wing advocate, JK Rowling, and Miss Bana Alabed share a talent and marketing agency?

“When seven-year-old Bana Alabed took to Twitter to describe the horrors she and her family were experiencing in war-torn Syria, her heartrending messages touched the world and gave a voice to millions of innocent children.” written on her Amazon book description.

Hello my friends, I am very happy to share with you the cover of my book #DearWorld. @simonbooks 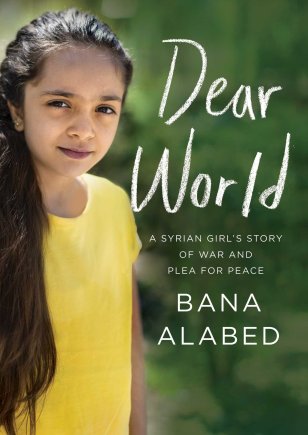 It should come as no surprise that Bana’s account which has an IP address that was tracked back to the U.K. is a front. Little Bana at 7 years old would not possibly be able to tweet in English and use words such as “besieged” due to the simple fact that in Syria English is not even taught until middle school. According to her, she was not in school during the war. At 7 years old that would have put her at second grade but having not been in school for the two previous years, it’s out of the realm of possibility that Bana’s English would be proficient to the degree that it is. Also, her tweets had a clear agenda to anyone that was a fan of using critical thinking and logic.

When anyone questions the legitimacy of her account Bana and her mother are quick to block them. I experienced this myself earlier this year.

@AlabedBana Dear banana , why is your twitter account registered in the UK and why are you banning ppl for asking this?

@Pinsnowes11@AlabedBana Some dude read out the metadata of her account, asked the same question and got banned pic.twitter.com/ci8Pjio3Hp

Her mother Fatemah Alabed  a self-proclaimed “Global peace activist” also created her own Twitter account has many followers as well.

On January 20th Fatemah tweeted “I am really sad to see Obama & Michelle go. But be happy, the Obamas could return 2020 as Mrs. Michelle president”. Ironically enough, in his two-term presidency, there was not a single day that the US was not at war. Eight whole years of war under Obama the “Nobel peace prize recipient” who brought this war to Syria and supported the armed “moderate rebels” who have been outed as being anything but moderate. She doesn’t seem fazed by the fact that he was supporting full-blown terrorists who can not be distinguished from their fellow Daesh and Al Qaeda counterparts. Fatemah must have missed the fact that he dropped more bombs than his predecessors on many countries including her own.

On January 27th Bana supposedly wrote a lengthy letter to President Trump asking him to “save the children and people of Syria”. In her open letter to U.S. President Donald Trump, Bana was asking Trump to help Syrian children. Bana and her family were evacuated from Aleppo in December and have relocated to Turkey. In the letter, she wrote, “I know you will be the president of America, so can you please save the children and people of Syria? You must do something for the children of Syria because they are like your children and deserve peace like you.“ 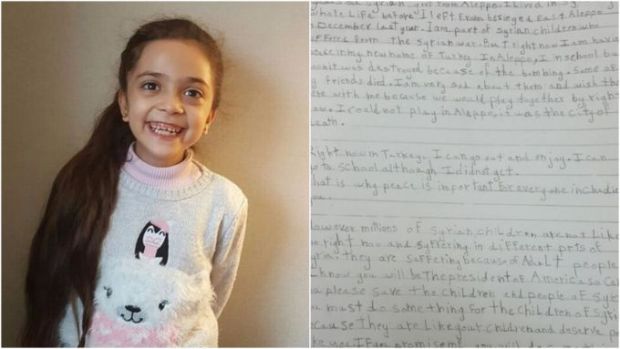 In a tweet on February 5th she said “Let me tell you the truth today. East Aleppo suffer so so so so so so so so much. Never listen to an Assad supporter, never, never”. This is months after Aleppo was liberated and children are now back at school and Aleppo is free of the filthy terrorists that were raping and killing innocent civilians and were enforcing Sharia law on everyone in the area. How is it suffering exactly Ms. Alabed?

On February 27th she wrote another letter this time addressed to Bashar Al Assad and Putin. This “peace preacher” said “My name is Bana Alabed from Syria. Stop bombing now, save the children of Syria and go to jail for killing my friends”.

In the above tweet Bana’s mother Fatemah is giving the impression that Bana died.. but then she later recanted her statement in the tweet below it.

These last pieces of evidence need to be addressed. Both photos have Ghassan Alabed’s head circled. The photo on the left is of Ghassan with his armed terrorist friends, the one on the right is a family photo taken when the family moved to Turkey and met with President Erdogan. If this was the only link he had to a terrorist group one might think to overlook it but there are numerous accounts of this affiliation.

Finally, her strong ties to the Al Qaeda White Helmets who were created in the UK.

The “unbiased, unarmed humanitarians also known as The White Helmets“.  This group of “heroes” as the media presented them to the world were also ones that recently won an Oscar for their documentary. These actors were also nominated for the Nobel peace prize. Who are the White Helmets you might ask? Well, when they are not faking rescues on camera for donations they can be seen with their weapons waving the Al Qaeda flag. These men are Al Qaeda’s civil defense and are not the real Syrian Civil Defense. They act in order to get donations and have received over $100 million dollars from many nations and private donors.

Every single armed group that is against the legitimate Syrian government and against the Syrian Arab Army has affiliations with Al Qaeda or another terrorist organization.

Even with the surplus of information that negates or at the bare minimum raises questions about the legitimacy of Bana’s twitter account, her followers and supporters are growing and multiplying in number by the day. War propaganda and using children to tug at heart strings is not a new invention. It is a tried and true emotional fallacy that helps promote wars, and in this case, calls for foreign intervention on a sovereign nation, and demonizing the leader of a country who has made strides in trying to protect the people of Syria from imported terrorists that have ravished the country for over six years.

Therefore, it is imperative that we raise awareness and expose those who push for further aggression in this dirty war. There are those who have an agenda that calls for prolonging the war rather than ending it. Under the fake guise of promoting peace, they are using social media as well as their accessibility to mainstream media to divide the country. It’s simply heartbreaking that they would prefer to see Syria become a pile of rubble rather than help to unite it and bring about stability. Looking past the cute front of this particular propaganda campaign tool we can see a very carefully calculated destructive method used to fuel the war in Syria.