In this photo released on Monday, Aug. 8, 2016 by Hawar news, the news agency for the semi-autonomous Kurdish areas in Syria (ANHA), shows the Kurdish-led Syria Democratic Forces raise their flag in the center of the town of Manbij after driving Islamic State militants out of the area, in Aleppo province, Syria. Syrian Kurdish officials and an activist group say U.S.-backed fighters have seized a key Islamic State stronghold in northern Syria after two months of heavy fighting and freed hundreds of civilians the extremists had used as human shields. (ANHA via AP)

The West claims that the Kurds are one of the most moral and dignified forces in the Middle East fighting against Daesh. But if their focus is on defeating Daesh, as they claim, why are they committing genocide against Syrians in the process? Taking this into consideration, it is hard to justify the West’s persistent claim that armed Kurdish terrorist groups are trying to help Syria.

The reality on the ground contradicts these empty compliments, which the West uses to save face while supporting these terrorist organizations. This false narrative was in fact used to arm the Kurds in Syria in order to create instability and division.

For separatist Kurds to claim an area that they have lived in or have liberated as being rightfully theirs defies international law and logic.

The U.S. has armed the Kurds and supported their efforts since helping them establish the Syrian Democratic Forces on Oct. 10, 2015. The U.S. needed to fund a group within Syria that was fighting against Daesh, but that was not as extremist as the Free Syrian Army, which was outed as being affiliated with al-Qaeda.

Per South Front on October 1, 2017, Omid Kabar a commander of the US-backed Syrian Democratic Forces (SDF) said, at a funeral for SDF fighters who were killed in Raqqa city, that the SDF will not handover al-Tabqah town or any other area to the Syrian government.

It is strange that the Kurds would be so antagonistic towards Syrians, as the country has largely been welcoming for them. For example, reforms were made in Syria in 2012 to benefit the Kurds. “President Assad issued a decree granting Arab Syrian citizenship to people registered as foreigners in the (governorate of Hassake),” said the SANA news agency. The measure, which benefited about 300,000 Kurds, came a week after Assad tasked a committee with “resolving the problem of the 1962 census in the governorate of Hassake.”

In January 2015, SANA news reported that then-Syrian Prime Minister Dr. Wael al-Halqi said: “the Kurds are a deeply-ingrained component of the Syrian society and Ayn al-Arab is part of Syria that is dear to the hearts of all Syrians.” Al-Halqi’s affirmation came during his meeting with a Kurdish delegation which comprised Kurdish figures. He also urged all to discard violence and spread amity, reiterating that a solution to the Syrian crisis could be achieved “through national dialogue and consolidating national reconciliations,” indicating that dialogue will definitely be “under the homeland’s umbrella away from foreign dictates.”

In 2014, The Civil Democratic Gathering of Syrian Kurds said that the steadfastness of the people of Ayn al-Arab in the face of terrorists was a form of expression of the Syrian Kurds’ commitment to their affiliation to their homeland of Syria. The gathering’s Higher Council of Secretaries said that the steadfastness of Ayn al-Arab was cause for admiration and that attempts to transgress against the territorial integrity of Syria were parts of a plot to cause chaos and division and undermine the resistance axis.

These are just a few examples of the Syrian government’s attempts to unify all of those who live within the country’s borders. But even with these actions of good faith, the SDF has chosen to side with Syria’s enemies rather than work with the Syrian army.

A recent agreement – initiated and brokered by the U.S. between a Free Syrian Army (FSA) faction and the Kurdish-led SDF lays out conditions whereby U.S.-initiated negotiations would allow the FSA faction al-Muatasim Brigade to peacefully take over 11 villages in northern Syria that are controlled by the SDF. The general outlines of this unprecedented agreement were announced on May 10, stating that the U.S.-led coalition had delegated to al-Muatasim the task of being in charge of and administering the designated villages. 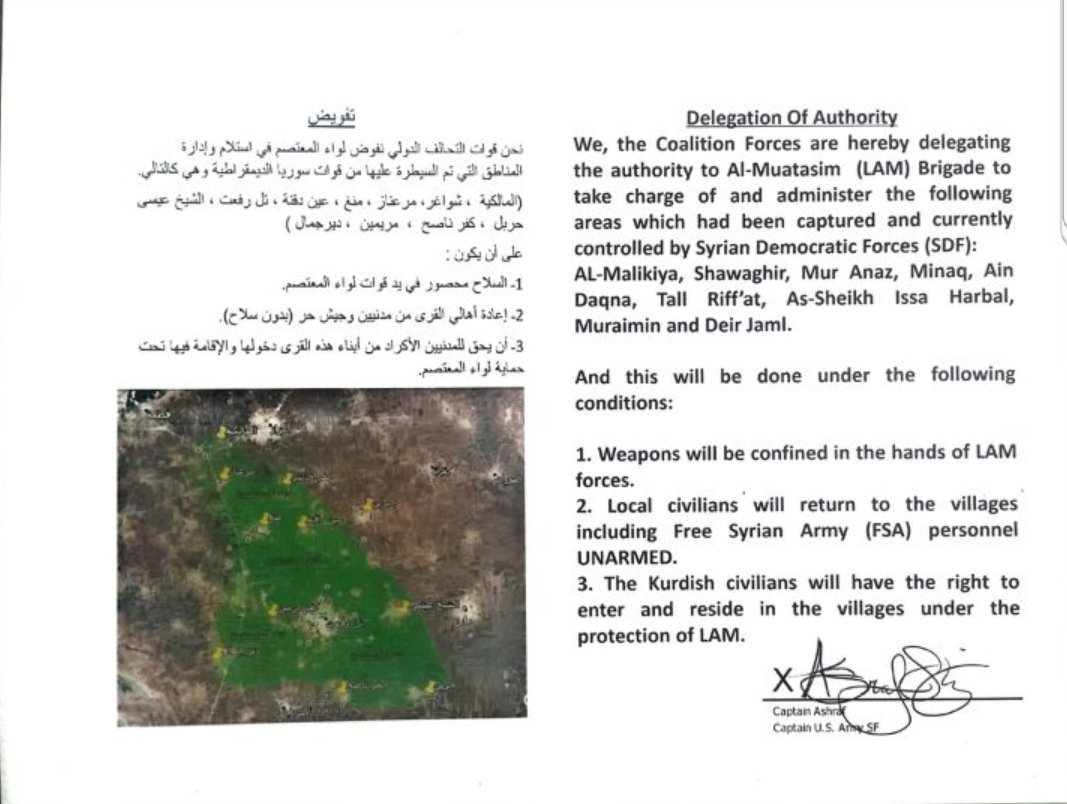 Al-Muatasim is known to be a strong ally of the U.S., which is why it was chosen to be in charge of the designated villages. This further proves the point that the U.S., SDF, and FSA are still working together. Their cooperation is part of an effort to counter the progress being made by the Syrian Arab Army and its allies.

The leaders of the SDF announced that they’ll try to annex the majority-Arab city of Raqqa if they manage to liberate it. The Kurds are ethnically cleansing Arabs from Raqqa en masse in order to pave the way for the city’s annexation to their unilaterally declared “Federation” after its forthcoming capture.