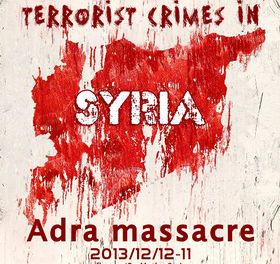 The recent terrorist attack against innocent civilians in Damascus, Syria, which claimed the lives of over fifty civilians demands reflection into what the non-belligerent country of Syria, home to a pluralistic society, and a secular government, is facing.

NATO’s dirty war on Syria consists of a wide range of terrorism, including economic sanctions, illegal bombing campaigns, and the insertion of about 360,000 foreign terrorists into the country.

Syria is winning this battle against international terrorism, and the Western dark state agencies that support terrorism —specifically, U.S-led NATO, the absolute monarchies/tyrannies of the GCC, and Israel.

Whereas Western populations are led by the nose to believe that our governments oppose terrorism, the opposite is true. The publicly-disclosed Regime Change/government-change war against Syria is terrorism.

The stated goal of the West and its allies is destabilization, which means the destruction of Syria as a country, and the balkanization of the country into ethnic and sectarian enclaves is one of their strategies — and sometimes this involves not only criminal bombing and perpetual violations of Syrian sovereignty, but also pitting one terrorist group against another if it serves to destroy the country.

Most of the Western propaganda memes have been thoroughly discredited, but a few still linger.

A predominant myth that still has legs, however, is that the genocidal, head chopping, organ harvesting, sex slaving, drug dealing terrorists are somehow Islamic.

In fact, all of the Western-supported terrorists in Syria are anti-Islamic. The “Islamic State” terrorists are literally Anti-Islamic State terrorists. They are mercenaries who serve the West’s interests of destroying foreign countries. None of the terror groups, including al Qaeda/al Nursra Front, the Free Syrian Army (FSA), and all of the fraudulently named “moderates”, are Islamic, although they might think otherwise.

The Wahhabism of Saudi Arabia, fountainhead of terrorism, is a weaponized political ideology, far –removed from the genuine teachings of Islam.

“Islamophobia”, a product of Western–engineering, is based upon lies and distortions. Imperialists cultivate these lies, and these hatreds, to further their criminal agendas.

Testimonies from Syrians are all but ignored by the West’s criminal mainstream media stories, but the ugly facts are foundational to destroying the fake narratives of the criminal warmongers.

All of the terrorists unleashed by the West are genocidal. They commit slaughters against Christians, against Alawites, against Syrians who support the Syrian government, and all manner of other innocent Syrians. This is known and documented.

Testimonies from Syrians who have witnessed these slaughters, such as those in the above video, are all corroborated, but under-reported.

FSA “moderates” committed genocide in Kasab. Terrorists from al Qaeda/al Nursra Front, the FSA and others worked together to commit their slaughters in Adra and elsewhere.

The ever-changing labels of the terror groups are part of the psyop used by “intelligence” agencies to provide cover for their crimes. This too is known and documented. We know, for example, that weapons are delivered to so-called moderates so that they can then deliver them to so-called “non-moderates”, and we know that different terror groups work together.

Syria and its allies alone need to continue their successful campaigns against the West’s Anti-Islamic State terrorists. The West and its allies are the problem. They’ll never be the solution.

Questions for “Satanic Crimes Against Humanity”:

Some reports indicate that as many as 360,000 foreign mercenary terrorists were injected into Syria.

Were most/many of the sectarian terrorists described from Jordan and elsewhere? Which other foreign locations were identified?

What evidence is there that the sectarian terrorists are actually anti-Islamic? (Sex slaves, rapes, beheadings, slaughtering innocent people including those identified as being another religious sect)

Answer: This question is problematic, because some people consider this as the truth of Islam, because these practices are endorsed by Al Azhar in Egypt, and since they are endorsed, Al Azhar can’t consider them as nonIslamic. However, in Syria we live together, we never had any problems with Muslims, Islam of Syria seems to be different from all that we saw from Al Mujahideen. So maybe you should take our word.

How does the West foster the growth of Wahhabism?

Answer: The West breeds jihadists, the worst radical muslims reside in the West (UK, Belgium, Germany), they are known to be supported from KSA and they have all the rights of a European citizen. All the wars of the West support the radical Islam or vice versa, or maybe it is a viscous circle, whenever there is a war by the west, to support Muslims, we know for sure it is radical Muslims (Yugoslavia) and in Afghanistan Taliban helped USA to defeat Russia, radical Muslims are the tool of the West to destroy the nations.

Everybody knows the history of KSA how it was named Al Hijaz, and then in a dirty plan from UK and the Jews they gave it to the Al Saud family, after a genocide against the inhabitants of the area. And now ISIS, even the dumbest people know it was created by USA, we know that the innocent angel Obama when he claimed to suspend the Guantanamo prison, all the prisoners came to Syria, and became leaders of terrorist groups. Not to mention the support thrown to the terrorists by planes and always being referred to as a MISTAKE!

Why does the West foster the growth of Wahhabism?

Answer: Religion is the opium to people, you can make it to create followers easily, so they use these puppets for their agendas, they shattered Iraq, Afghanistan, they gave Egypt away to the Muslim Brotherhood. The creation of the Muslim Brotherhood was in Egypt by someone called Hassan Al Banna. Al Banna means the man who builds. Does this ring a bell to you? A Mason, this Hassan Al Banna was Masonic, and he created this group. It has to be loyal to them, and of course they have to serve it’s agenda.

Why were victims targeted?

Answer: They targeted Alawites mostly, employees of the government sector, security agents, military, public defence groups, or if they are pro government. Others were killed as well who were Christian, Shia, etc.

What happened to targeted victims?

Answer: The family Muhalla, the man was armed, he killed his family to save them from the worst. Be-headings per building, they stand outside the building, they had informers from Adra itself, they gather the victims names and be-headed them, or shoot them to death. And if it is an Alwite family or Durzi or Murshidi, Ismaiilie (minor religious groups) they kill the whole family and leave one person to lead them to people he knows from his same religious groups.

Also, they burned the local baker alive, while he was baking bread. They even threw children in the oven, one of the children said to them “I will tell God about you”. If someone they consider traitor they cut off half his pinky, if a man smokes they cut off half of his second and middle finger. A man was hiding people in his house to protect them from terrorists, when they knew they killed him right away.

What evidence is there that all of the terrorists work together?

Answer: It depends, they work together as a group, but not all the groups work together, after all, we should not forget that not all of them are really religious. The religious ones among them woke up one day and tried to leave them because they found out that those are not real Muslims, some manage to escape, some get killed. The part that is not religious, they mostly came to work, so they get paid by American dollars, they get delicious food, they are able to buy women for few dollars, they can have as much sex as they want, they have authority, those are the ones who lead the fights against other terrorist groups for power and authority, the proof is what we see now in Idlib, killing each other like crazy. If you mean about working together their relations to KSA, this is for sure, they all get orders from some Sheikh in Saudi Arabia, but they do not have to work together, but their ideology is the same.

What evidence is there of ethnic cleansing?

Answer: Adra genocide is a proof, because they were all killed because of their religion, among other reasons.  They did not only kill the one involved, they killed families with the children.

How do these testimonies represent an inversion of the propaganda meme that “Assad kills his own people”?

Answer: First of all, Adra is full of militaries, killing Assad’s militaries would have been bad for the whole army. Second, those people who survived told us everything, it was horrible what a colleague said about it. She was one of the 200 that fled on a day under fire. She has a baby girl that she got after 6 years waiting. She held her in her arms and fled, she said, we were walking for ages and ages, the distance refused to end, dead bodies were all around, but it was a choice between instant death if shot down, and continuous death under the terrorists bad treatment.

If Assad is killing his people, why would they escape the terrorists and go to areas under the regime. In fact it is the NATO terrorists who willfully kill Syrians, not Assad.

On 4/24/2016 the “Rebel” Commander was killed in Airstrike as reported by AlMasdar News “However, it has now been revealed to al-Masdar that Jaish al-Islam commander Muhammad Maher Omar Buwiydani was killed in the artillery attack which struck near al-Rahman Mosque in downtown Douma. This Islamist rebel commander was heavily involved in the Adra massacre (December, 2013) which in collaboration with Jabhat al-Nusra saw at least 40 civilians from religious minorities executed at point-blank range.”.

2 Comments on The West’s Anti-Islamic terrorists