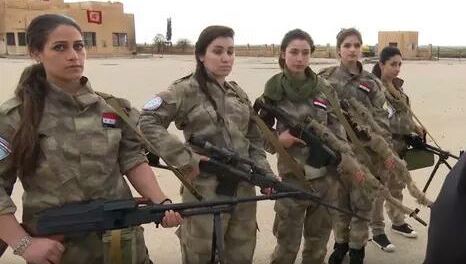 In 2015 Sputnik News reported, “Al Mahavir is an all-volunteer unit. After undergoing a special training course, the female soldiers immediately join the war effort, fighting against the Daesh forces in hotspots across the country, including the pitched battle fought in the city of Daraa near Damascus.”

“We came to fight by our own volition. We knew that it would be difficult, but still we came,” one of the servicewomen told RT.

“When I joined the battalion, I clearly understood that Syria is my mother. And if the mother is ill, her daughter must be at her side,” said another. “Syria is ill now. And that’s why I’m here, in this battalion. I will fight for my mother. I will cure her so that we can leave together in peace like before.”

Contrary to popular belief (which is becoming less popular with each passing day as the truth reaches more people) the war in Syria did not begin as a revolution which then turned in to a civil war. From the onset, this was a carefully planned and executed invasion and imposed war by foreign nations.

Syriana Analysis
Published on Mar 18, 2017 “The narrative of the corporate mainstream media is that the vast majority of Syrians resorted to peaceful protests against the “dictator Assad regime”. In this video, I will prove with shreds of evidence that what you were being told is a lie.”

What many might not know is that Syria is a country that selflessly took in Iraqi refugees without papers and Palestinian refugees by the tens of thousands from 1948 onwards. Many nationalities have sought refuge in Syria and were made to feel at home. The Syrian government stood up for Palestinians against “Isreal” more so than any other Arab country.

Syria was let down by its neighboring countries with terrorists flooding in through the borders of Turkey and Jordan. A country whose strongest allies are not even Arab except for Hezbollah which comes from Lebanon. Russia and Iran have stood by Syria when other “Arab” nations tried to bring about its destruction.

In a speech on November 14th, 2017 “President Al-Assad clarified that the main goal of the war to which Syria has been exposed for seven years is to return the country and the entire region centuries back through targeting the national feeling and belongingness to this region and through putting the Arabs in front of two options: either to give up their identity and subjugate to foreign powers or adopt the extremist thinking and turn Arab societies into conflicting entities.The president affirmed that the ongoing war, despite the huge destruction it caused to Syria, couldn’t weaken the faith of the Syrian people in the inevitability of victory over terrorism and its internal and external tools through the sacrifices of the hero Syrian army and the popular support for this army. It also couldn’t break the Syrians’ will to keep adherent to their identity, doctrine and national belongingness.” Please keep these brave ladies and all of the amazing warriors in this war on Syria in your prayers.

“A battalion of female volunteers conducted military training south of Damascus, Tuesday, in order to “protect the motherland” from Syrian militants, according to one of the volunteers. The battalion known as Al-Mahavir is made up primarily of female fighters who have joined together in order to quell militant expansion in their country.
The difficulties of military acceptance was expressed by one of the volunteers who said “Eastern society doesn’t accept women with guns fighting alongside men. So we had some difficulties. However, we justified our presence and proved our ability to protect the homeland.”

You can follow me on my social media accounts, by clicking on the hyperlinks below for daily news, updates, discussions, etc.